In a 5-2 en banc opinion issued December 22, the Commonwealth Court flatly rejected the notion that a utility must prove “absolute necessity” before resorting to condemnation.  Affirming the PUC’s grant of PPL Electric’s application to exercise its eminent domain power to acquire rights-of-way and easements over the private lands of protestants to construct a new eleven-mile transmission line across the Susquehanna River and a related substation, the Court reaffirmed prior case law adopting an easier hurdle for would-be utility condemnors.  As the Court reasoned:  “Under Protestants’ proposed standard, utilities could only seek approval … when a problem is looming and the resolution is ‘absolutely necessary.’  Utilities would essentially have to wait until an existing system fails before seeking approval of a project.  Not only would this approach be impractical and unrealistic, it would actually pose a danger to the health, safety and welfare of the public.”  Hess v. Pennsylvania Public Utility Commission, 1370 C.D. 2013 (December 22, 2014) (en banc).

In a 4-2 decision,[1] the Pennsylvania Supreme Court upheld a Superior Court decision overturning the trial court and denying Duquesne Light summary judgment on the issue of whether a utility has a duty to warn a customer of potential danger on the customer’s side of the service point where the utility has taken affirmative action to restore service and has actual or constructive knowledge of such danger.  Alderwoods, Inc. v. Duquesne Light Co., No. 12 WAP 2013 (Pa. December 15, 2014).  The case arose from a fire caused by an electrical panel in the basement of Alderwoods’ funeral home after Duquesne restored service to the premises by making substantial repairs to a utility pole downed by a car crash outside the funeral home.   Slip op. at 2.

Last week on our list of waiver traps for Pennsylvania appellate practitioners (“Taking an Appeal in PA? 10 Waiver Traps to Avoid,” 24 Nov. 2014), we included the warning “be specific enough in your petition for review.”  Fortunately, effective January 1, 2015, that trap has largely disappeared, as the result of yesterday’s amendment to Pa. R.A.P. 1513(d).  That rule, which requires the petitioner from an agency order to include in an appellate petition for review a “general statement of the objections to the order or other determination,” has too often been the basis for a finding of waiver of issues not specifically mentioned, sometimes resulting in the outright quashing of an entire appeal on essentially technical “gotcha” grounds.  The rule as amended retains the requirement for a “general statement of objections,” but adds the important qualification that “the omission of an issue from the statement shall not be the basis for a finding of waiver if the court is able to address the issue based on the certified record.”  The Official Note explains that the purpose of the amendment is to “preclude a finding of waiver” if an issue that is briefed but omitted from the petition for review can be addressed by the court on the basis of the certified record.  In other words, if an issue is otherwise preserved, but overlooked in the petition for review, that fact will no longer be a basis for a finding of waiver.  One less thing to worry about for administrative law practitioners!

A copy of the amendment to Rule 1513 can be found here.

Taking an Appeal in PA? 10 Waiver Traps to Avoid

Pennsylvania’s appellate rules and the ever-evolving case law interpreting them can make it a challenge to even get to the merits of an appeal.  Don’t get caught on the wrong side of a waiver trap. Some reminders:

What does the future hold for Pennsylvania’s competitive energy markets?

As the PA PUC embarks on its investigation of the natural gas markets, what evidence can we discern about how the agency sees competitive energy markets and how those markets should evolve?

Victory For Sunoco Pipeline in Second Round Before PUC

On Thursday, July 24, the Pennsylvania Public Utility Commission decided on a way forward that will allow App-based transportation networking services Uber and Lyft to continue operating in Pittsburgh while the Commission decides whether and how to grant them permanent authority to operate. The Commission granted Emergency Temporary Authority (“ETA”) for the entities to operate experimental transportation networks in Allegheny County and simultaneously granted Commission prosecutorial staff petitions ordering the entities to cease and desist operations.  The net effect is that the Commission has determined on a preliminary basis that Uber and Lyft have been operating illegally (i.e., before their applications to provide transportation service were granted), but has also allowed them to continue operating (in compliance with strict ETA requirements) while their pending applications are being considered by PUC ALJs. Moreover, during their operation under ETA, the Commission directed that the entities maintain insurance higher than the minimum required by the relevant regulations and imposed eligibility restrictions on vehicles that offer transportation service.

In Robinson Township v. Commonwealth, 83 A.3d 901(Pa. 2013) the Pennsylvania Supreme Court invalidated key provisions of Act 13, the statute that removed from local zoning control the power to regulate oil and gas operations through restrictions on the placement and operation of  oil and gas facilities.  The Court remanded to the Commonwealth Court to consider whether other provisions of Act 13, including provisions that give the PUC power to review local zoning ordinances and withhold impact fees, remain viable.

On June 2, the EPA released its much anticipated proposed rule mandating a reduction in carbon emissions from existing power plants.[1]  The rule requires an overall national decrease in carbon emissions by 30% from existing plants by 2030.  The proposed rule instructs states to submit plans to achieve state specific goals for emission reductions.  Alternatively, states may collaborate with other states and submit a joint plan.  Plans must be submitted by 2017, or 2018 if collaborating with other states.[2] 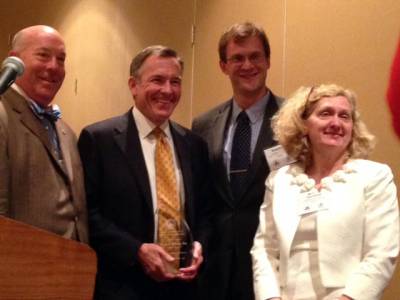 The Pennsylvania Public Utility Commission (“Commission”), which regulates moving companies, is reviewing comments to proposed rules that would make it easier for movers to obtain authority to commence operations in Pennsylvania.  In its September 12, 2013 Proposed Rulemaking, the Commission recommended revisions to the evidentiary criteria applicable to moving company applicants.  As reported in an earlier blog post on this site, the revisions recommended by the Commission would significantly ease entry barriers for new applicants, thereby encouraging more entrants and creating increased competition within Pennsylvania.

On January 2, 2014 the Pennsylvania Public Utility Commission and Department of Environmental Protection (“Applicants”) filed an Application for Reargument of Robinson Township,1 in the Pennsylvania Supreme Court, requesting reconsideration of the December 19, 2013 plurality opinion and remand to the Commonwealth Court for an evidentiary hearing and findings of fact.  The Applicants argue that the plurality of the Court, in applying its newly coined Environmental Rights Amendment balancing test, adopted novel and unsupported findings of fact, contrary to established Supreme Court principle against taking on a fact finding role in its appellate jurisdiction.  Robinson Township, et al., (“Townships”) answer that no disputed facts were necessary to the Court’s balancing test, and in the alternative, judicial estoppel precludes Applicants from requesting an evidentiary hearing because Applicants successfully argued in the Commonwealth Court that the Act’s constitutionality was purely a question of law.  Applicants also request remand to have the Commonwealth Court determine whether the unconstitutional set back provisions are severable from the rest of Act 13.

On January 14, the US Court of Appeals for the D.C. Circuit invalidated certain rules adopted by  the Federal Communications Commission’s (FCC)  in its Open Internet Order (In re Preserving the Open Internet, 25 F.C.C.R. 17905 (2010)).    The Court concluded that these rules imposed common carrier obligations on broadband internet providers, contrary to express limitations in the  Communications Act,  and were thus invalid.  Verizon v. Federal Communications Commission, Dkt. No. 11-1355 (D.C. Cir. January 14, 2014) (“Verizon”).

Back in June 2011, we reported here that Congress’ brand new creation known as the “Federal Insurance Office” (FIO) had found its first Director in former Illinois regulator Michael McRaith.  We cautiously anticipated then the issuance of the FIO’s initial report to Congress, scheduled for January, 2012, regarding the effectiveness of the state-based system of insurance regulation, as well as recommendations for changes and improvements.  Industry stakeholders speculated then about what the establishment of this new federal bureaucracy might signal and what role the Feds might be looking to assume in their industry in the wake of scares about financial instabilities surrounding major U.S. insurers. The decades-old debates about federalism in the regulation of insurance were sparked anew and we waited for word from Director McRaith and his Office.  And we waited.  A year passed and we waited some more.  Another year passed and the Feds rolled out their health insurance marketplace and that went…well, they did roll it out!  You may have heard.

A government body subject to the Sunshine Act’s requirement of public decision-making is free to engage in non-public information gathering sessions, including private meetings with opposing parties in ongoing litigation in which a quorum of the agency members participate, so long as the actual decision-making, or “deliberation” takes place at a public meeting, the Supreme Court has ruled. In Smith v. Township of Richmond 34 MAP 2013, __A.3d __ (December 16, 2013), the Pennsylvania Supreme Court “allowed appeal on a limited basis to examine whether the Sunshine Act’s definition of ‘deliberations’ is implicated where… an agency meets with various parties – including opposing parties in litigation – to obtain information designed to help the agency make a more informed decision with regard to settling the ongoing litigation.” In finding no violation and permitting the fact-finding sessions, the Court affirmed the decisions of the Commonwealth Court and the trial court.

The Pennsylvania Supreme Court held key provisions of Act 13 unconstitutional under the Environmental Rights Amendment (ERA) of the Pennsylvania Constitution in a plurality opinion on December 19, 2013.  Act 13 was designed to streamline regulation of the oil and gas industry by setting statewide zoning standards and administrative review procedures, which posed significant financial ramifications for non-compliant municipalities.  The Court specifically held that the provisions mandating municipal zoning standards, such as permitting industrial oil and gas operations as a use of right in every zoning district throughout the state, are unconstitutional. These provisions were overturned because the legislature has abrogated constitutionally proscribed municipal duties to protect the rights guaranteed by the ERA.  The Court also held that provisions of the act imposing a waiver process for mandatory setback from waterways, administered by DEP, also violated the ERA.

On November 25, 2013, Governor Tom Corbett signed Act 89 (the “Act”) into law.  The Act, predominantly funded by an increase in motor fuel taxes, will provide needed upgrades to Pennsylvania’s transportation infrastructure.

The PUC’s deadline of December 12, 2013, to receive comments from interested parties on the current state of competitiveness of the natural gas market in Pennsylvania is drawing near.