Julie has over twenty-five years of experience in the areas of telecommunications and public utility regulation. For more than ten years, Julie was Vice President and General Counsel for Verizon Pennsylvania (formerly Bell Atlantic Pennsylvania), responsible for all Pennsylvania regulatory matters, including all proceedings before the Pa. PUC, appeals to state and federal courts, and initiatives before the Pennsylvania Legislature. Prior to that time, Julie was Regulatory Counsel for Bell Atlantic, responsible for rate cases and other major regulatory proceedings.

During her tenure with Verizon and Bell Atlantic, Julie was lead counsel in numerous complex rate and regulatory proceedings before the Pa. PUC, from merger approvals to implementation of the Telecommunications Act of 1996.

Julie is currently an Adjunct Professor of Law at The Villanova University School of Law where she teaches Telecommunications Law and Policy. 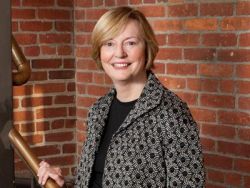