Bill was a Founding Partner of the law firm in 1982.  He practices in the area of utility regulation before the Pennsylvania Public Utility Commission (Pa. PUC) with an emphasis on energy and mergers and acquisitions.

Bill also provides advice and representation in a wide range of public utility matters, including all types of certificate proceedings, tariff proceedings, affiliated interest filings, security filings, and enforcement proceedings.  Further, Bill has briefed and argued many appeals before the Courts of Pennsylvania.  In addition, Bill has assisted other law firms which required a regulatory presence or special expertise in Harrisburg. 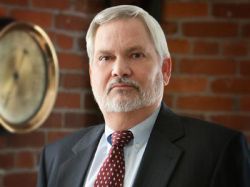 J.D., Dickinson School of Law of The Pennsylvania State University, 1974
B.A., with distinction, The University of Virginia, 1971